A brow lift (commonly referred to as an eyebrow lift or forehead lift) is a plastic surgery procedure that essentially pulls your eyebrows back into a more youthful position. A sagging or low brow tends to create upper eyelids that appear heavy and look overhung, but a forehead lift addresses such areas of concern. The Glasgold Group specializes in brow lift surgery in Princeton, New Jersey, with an extensive list of satisfied patients! Find out more information below!

What is a Brow Lift?

One of the effects aging has on our face involves a loss of facial volume, sagging skin, and a lowered brow. Though the term “eyebrow lift” describes the procedure perfectly, it is far from being an easy, simple surgery. Our New Jersey brow lift consists of many techniques and methods depending on the severity of each case. Repositioning the eyebrows upward to a natural position does much to correct and improve the appearance of the eyes. Some patients will only need minor treatment to the lateral brow, however, sometimes through the use of a Botox brow lift while others require more surgical intervention.

Wrinkles between the eyes and furrows on the forehead may be addressed through a Botox brow lift, but results are longer-lasting and optimal with the endoscopic brow lift technique. When your entire eye area needs improvement, as in not just the brows but eyelids, too, this procedure can be done in combination with a blepharoplasty, or eyelid surgery. Together, this often addresses serious aging signs in the upper third of the face.

Procedure Before and After Photos 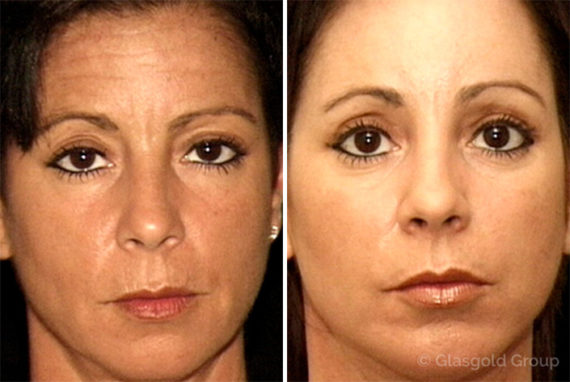 * Each patient is unique and individual results may vary.

In the case of browlifts, one of the distinctions made during the consultation with your plastic surgeon will be which brow technique to utilize. There are three popular methods: the coronal brow lift, the lateral brow technique, and the endoscopic lift.

A coronal brow lift (otherwise referred to as the traditional forehead lift), involves incisions being placed behind the ears (and further behind the hairline to prevent any visible scars) and pulling the skin back. This is the more direct and invasive method of the two and targets more areas of concern than the other.

The lateral brow lift (often referred to as the temporal lift) targets the lower eyelids and crow’s feet and is ideal if the patient’s signs of aging are not as severe, or if a high hairline is the main concern. The incisions are made along the hairline, though are much closer to the line than the coronal brow lift technique.

Other methods, such as the aforementioned endoscopic brow lift, are the preferred technique for providing patients with the best eyebrow lift results, which involves a far less-invasive approach due to the small incisions made. It allows us to perform the restoration through three to five minimal incisions of one-half inch to an inch made in the scalp above the hairline. A thin endoscope about the size of a pencil inserted through these incisions allows us to elevate the sagging brow. Relying upon this state-of-the-art technology, forehead tissues are lifted and repositioned, remaining in place for years to come.

During your NJ brow lift consultation with either Dr. Robert or Mark Glasgold, your doctor will cover any questions you may have regarding what areas you’d like to see improvement in, as well as offer suggestions, provide an overview of what to expect, and which type of surgery is right for you. The doctor will go over your medical history, as well, to ensure that you may be a good candidate for this procedure.

Dear Dr. Glasgold, Thank-you so much for your kindness, understanding and your knowledge. You really helped me so much. Sincerely,

Your safety and satisfaction are our priorities

How is a Brow Lift Done?

All brow lift surgery is done with either general or local anesthesia, depending on severity. You will meet with the anesthesiologist before being taken to the operating room, where Dr. Robert or Mark Glasgold will perform your brow lift procedure using either local or general anesthesia depending upon what you are most comfortable with.

A brow lift procedure typically lasts between one to two hours, depending upon the area being worked on and which technique is performed. The patient can expect their head to be wrapped in a support bandage for several days immediately following surgery; then, they will be able to use ice packs for swelling relief while still wearing the bandages. Patients can return home on the same day of surgery, though they will need someone else to drive them.

Elevating the brow is often an important aspect of facial rejuvenation.  The goal of a brow lift is to open the eye by lifting drooping brow fullness particularly on the outer part of the eye.  A brow lift will also smooth the angry or frown appearance of the central eyebrows, minimizing or eliminating the need for botox.

In 1995, Dr. Glasgold was one of the first group of surgeons to embrace the endoscopic browlift. It is the only type of browlift he performs due to the minimal invasiveness and very high patient satisfaction.  The endoscopic brow lift is performed through 4 small (1/2 – 1 inch) incisions in the hairline which leave almost no sign of surgery and does not remove any hair.

The surgery is performed under twilight anesthesia and takes about an hour.  Recovery is usually about 1 week with some bruising and swelling.

Risks or Side Effects of Brow Lift

Some side effects and risks exist for brow surgery but such chances of occurrence are cut significantly smaller when under the care of a board-certified, qualified professional. Patients may feel some numbness and discomfort around the incision area(s) following the operation, as well as bruising and slight swelling around the eyes and cheeks. Despite this, there is only minimal pain felt by most patients.

As far as risks go, there is always a chance of scars forming where the incisions are made, but they are strategically placed by brow experts to not be noticeable. There are rare instances where a patient may have trouble making certain facial expressions (eyebrow movement) and revision surgery may be needed to fix this. A loss of feeling around the target site may occur, but this is only a temporary effect. As stated before, all chances of these risks occurring are lessened when your surgery is done by an experienced doctor, such as Drs. Robert and Mark Glasgold.

How Much Does a Brow Lift Cost in New Jersey?

Brow lift cost can vary, as does the price of other surgeries. If you are curious about what this specific procedure may cost you, please let us know and we will be happy to provide a more detailed estimation.

Why Choose The Glasgold Group

The brow lift is a complex and custom procedure that requires a high level of skill and knowledge to perform properly. At Glasgold Group, our surgeons have decades of experience while patients and peers alike respect them for the beautiful, natural-looking results they produce consistently.

By choosing Glasgold Group in Princeton, New Jersey for your procedure, you can expect results of the highest caliber and the knowledge that your safety and satisfaction are top priorities.

Can you move your eyebrows after a brow lift?

Yes. Most eyebrow movement is possible following the operation and you can move them as needed for comfort.

How long is the recovery from a brow lift?

Recovery periods will vary depending on which type of brow surgery you go with, per your surgeon’s recommendations. By far, the endoscopic brow lift is the option with less downtime required, but the healing process varies in each case.

At what age should you get a brow lift?

No set age determines when you should have a brow lift. Many people get their surgeries because of sagging tissues, whereas others opt for it as an anti-aging measure ahead of time.

How long does a non-surgical brow lift last?

A non-surgical brow lift, which uses BOTOX injections, may last anywhere from three months to a year, depending on the number of sessions you decide to opt for.

A brow lift can do much more than just improve the sagging of your eyebrows. Depending on what other areas need improvement, it can also be used to change the shape and position of your eyes—more specifically, lessen hooded eye syndrome.

What brow lift office is near me?

If you live near Princeton, NJ, The Glasgold Group offers brow lift among its services and is conveniently located at 4390 US-1 #100, Princeton, NJ 08540.

Does a brow lift change your eye shape?

Eye shape will not be altered, but if the eyes require improvement, brow lifting can be used as part of a multi-procedure approach to help lift and reshape eye areas.

Is a brow lift worth it?

A brow lift can be worth it if done by a professional and properly performed.

Does a brow lift make your forehead smaller?

This procedure is used to make it appear as though the individual has a higher browline. This can be achieved by lifting the area of skin or moving muscle so that it leaves space for more of the eyebrow to be visible, thus reducing the forehead size.

If you are interested in enhancing your eyebrows through brow lift surgery, contact our experts today. You can call our office for more information regarding the procedure or for scheduling an appointment at 732-838-6758, or fill out our online contact form to schedule your brow lift consultation in Princeton, New Jersey!

Our high level of training and experience allows us to provide each patient with results that look natural and rapid recovery in the safest environment.

Get rejuvenating results without going through surgery. Injectables and dermal fillers are a great way to keep yourself looking younger and vibrant with little to no recovery time.

Let us help you take care of your skin with skin care procedures and peels. We have a variety of specialty skin care techniques that will have you glowing and looking your best.

SUBSCRIBE TO OUR
EMAILS FOR SPECIALS
AND OTHER NEWS!